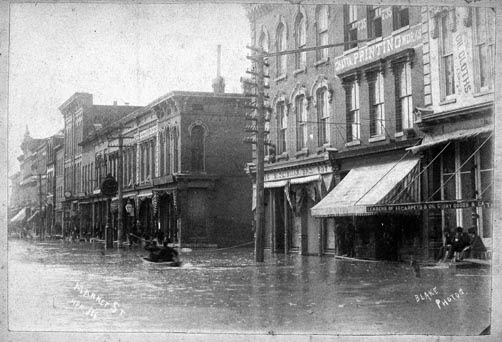 Chattanooga has been at the intersection of history for thousands of years and a hub of American milestones in education, health, industry and innovation since John Ross established his trading post in 1816. In 1922, the city boasted a population of 57,000 residents, radio was the main entertainment, gasoline was 30 cents a gallon, the average household income was $3,269 a year and the Chattanooga Community Chest, now United Way of Greater Chattanooga, was established to unite people and resources in building a stronger, healthier community.

History’s greatest civilizations have grown where mountains, plains and rivers meet and Chattanooga has been at the crossroads of history for over 12,000 years. Where “cotton meets corn,” Chattanooga became the Chicago of the South during Post-Civil War years as transplanted Northern industrialists, many former soldiers, capitalized on the strategic assets of the city and its location as the gateway to the region. The post-Civil War boom saw a sleepy river town transformed to a sprawling military and industrial complex led by family names that remain familiar today.

New leaders and established City fathers worked together as remarkable growth saw a pre-Civil War population of 2,500 boom to almost 20,000 with Chattanooga at the hub of the South’s industry. Amid the success of the era, Chattanooga’s residents suffered profound losses battling devastation from repeated flooding and contagions unknown to medical advances of the time. Disease and death from cholera, yellow fever and the Spanish flu left orphans and widows, scores of Chattanoogans in great need.

In 1921, the Tivoli Theater was one of the first air-conditioned public buildings in the South as its neighbor, the locally-owned hydroelectric innovation, Tennessee Electric Power Company, electrified the city. An ordinance banning horse-drawn vehicles on Market Street was passed, streetcars served the downtown, the James Building was a skyscraper and the city grew. Business leaders with names like Brock, Caldwell, Chamberlain, Chapin, Elliott, Evans, McCallie, Ochs, Patten, Probasco, Street, Wheeler and Wilder led the way.

Losses from World War I added to the rolls of residents in need; including orphans, widows, the disabled and infirm, and banking and insurance companies settled in the new Southern powerhouse. Interstate Life and Accident, Provident Life and Accident and Volunteer State Life Insurance protected the country as new organizations like Little Miss Mag Day Nursery, the Salvation Army and the Y.M.C.A. began serving the needy closer to home. A group of business and professional leaders, men representing businesses that were changing the landscape, saw redundancies in the efforts of those serving the needy and met to consider the organization of a community chest to benefit area agencies and the neighbors they served.

The Chattanooga Community Chest was modeled after the nation’s first united campaign, an 1887 organization inspired by a Denver woman, priest, two ministers and a rabbi who created a movement that would become the United Way. Collecting funds for local charities, coordinating relief efforts, counseling and referring clients to cooperating agencies and making emergency assistance grants for the neediest cases, Chattanooga’s Community Chest was established on September 11, 1922. This campaign combined the principles of budgeting and fundraising to fight disease and the wages of poverty, its efforts continuing today as United Way of Greater Chattanooga begins to reflect on 100 years of service to the city and its people.

Until innovations in technology harnessed rivers to produce hydroelectric power, Chattanooga’s downtown flooded repeatedly. This 1917 photo was taken from Cameron Hill and shows the bridge on Market Street under construction.